back Come on a journey back in time!

Join Marcus and Annilio, a Roman boy and a Celtic girl, on their adventures in the Römerregion Chiemsee and discover something new at every place they visit.

2000 years ago, the Chiemsee region was quite a different place. The lake was considerably larger; bears and wolves lived in the surrounding marshes, woods and mountains; the winters were bitterly cold. Nevertheless, people lived here. Many centuries before the Romans came, Celtic tribes had settled on the shores of Lake Chiemsee and built small villages.

Roman settlers moved in and made the Chiemsee region their home. Roman and Celtic cultures met and mixed, as did the people, learning from each other. The Celts adopted many aspects of Roman civilization and, in time, they even learned their language. In the end, Latin was widely spoken on the shores of Lake Chiemsee.

The Roman settlers built large country estates and new roads for trade. Their favourite locations for building had access to water, such as a spring or a river, were connected to existing roads, and had a commanding view of the surrounding countryside, so that they could keep an eye on their property. In Bernau, an important Roman official named Lucius Terentius Verus found an ideal place to build at the foot of a hill now called the Hitzelsberg and built a manor house in typical Roman style.

Marcus is his grandson. Lucius Terentius Verus comes from a distinguished Roman family. He himself has done honourable service for the Roman state and now wishes to enjoy his retirement in the comfort of his estate in Bernau. His country house has all the commodities of life a Roman would expect. Of course, this includes a bath house with warm water and a steam bath.

Marcus’ family owns large properties in the region. His father, Caius Terentius Praesentinus, has plenty of work to do: there are animals to feed, grain to plant, harvest and storage work, and, last but not least, the products must be sold to earn some money. Marcus’ mother, Julia Romana, is kept busy with the inventory. Much of the work, however, is done by their employees, some of whom are Celts and know the region well. They also have their male and female slaves.

One fine day, Marcus’ father takes him on a visit to the chieftain of a local Celtic tribe. Caius Terentius believes that Marcus, who is now nine, is old enough to learn to bargain and make good deals.

The tribe calls itself the “Bear Tribe” and lives near the Chiemsee. Between the huts in the village, chickens are running around free and a group of children is chasing a piglet, shouting and laughing. The villagers watch the arrival of the Roman visitors full of curiosity. The chieftain lives in a large hut in the middle of the village. He greets Marcus’ father warmly like an old friend. The two men sit down to drink mead and negotiate for hours on end. At first, Marcus obediently sits with them and tries to follow their discussions. But finally his head begins to spin and, becoming bored, he looks around the hut and sees a girl giving him a sign: Come out! Marcus’ father is so busy with negotiating that he doesn’t even notice his son sneaking out the door. Outside, the chieftain’s daughter Annilio is burning to riddle Marcus with questions about how the Romans live. She has often passed the estate of Marcus’ family and wondered why they have all those buildings. Marcus is simply knocked off his feet. He has never met a girl like Annilio before. His sister Claudia would certainly never have dared to talk that way with a boy from a Celtic village. Boating on the lake 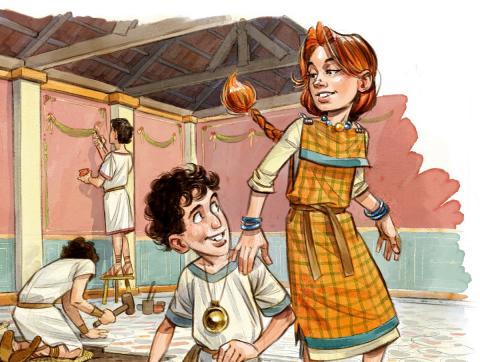 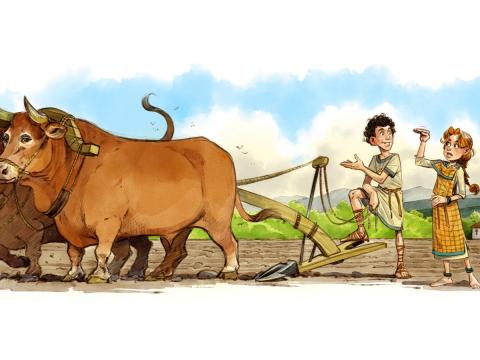 Ploughing with oxen is easier A letter from Rome 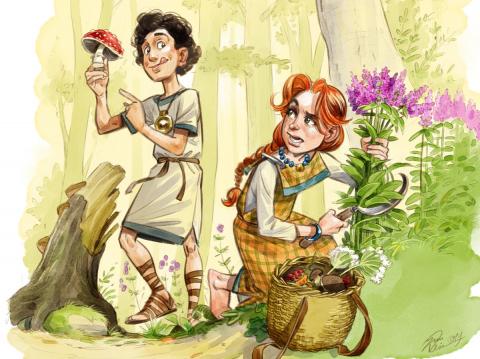 A fine day at the market 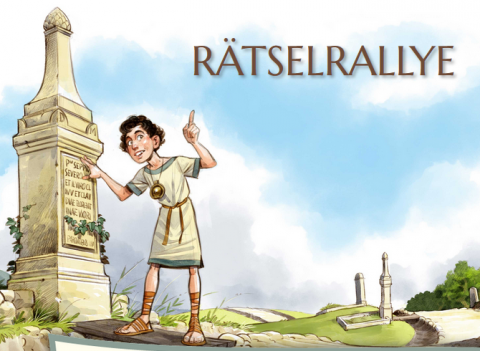 Do you know your Roman history? Or did you visit the exhibition on the Roman past in Chieming with your parents and want to see what you have learnt? Our Roman Riddle Rally is a fun way to test your knowledge. (German language, redirecting to the homepage of the community of Chieming)