back Marcus and Annilio - Chapter 7

A letter from Rome

Since his last birthday, Marcus has started learning to read and write. Once a week he rides to his uncle’s estate an hour away in the north to take lessons. Quintus Publius Victorinus is married to the sister of Marcus’ mother. As a high ranking civil servant in IUVAVUM, he has enough money to hire a private teacher for his children at home, and Julia Romana has decided that Marcus should learn with them. Marcus is not so keen: He sometimes tries to find excuses to avoid going, but his mother is adamant.

“Good Latin is a door-opener,” she always says. “Consider yourself lucky that my brother-in-law, Quintus Publius, is allowing you to take lessons. And now enough! I don’t want to hear any more excuses.” When Marcus’ mother starts talking that way, Marcus knows that she won’t change her mind.

One fine day in May, Annilio comes to visit Marcus. She really ought to be at home helping her mother with the washing, but she’s promised her mother to clean up the hut tomorrow without a word of protest, and her mother finally lets her go.

Marcus is just leading his horse from the stables, as Annilio storms up. “Where are you off to Marcus? Can I come?”

Marcus’ mood lightens as he sees her. “Salve, Annilio! Yes, come with me. I’m riding to my uncle: Latin lessons.”

“O!” Annilio is disappointed. She can’t simply join the lessons uninvited. “I’m not sure. What would I do there?”

Marcus scratches his head. Then he has an idea: “I know. While I’m busy with boring texts written by some clever clogs poets, you could have a look around the garden terraces. You’ll like that: There are all kinds of fruit trees, herbs and vegetables, nuts and …”

“Say no more,” Annilio interrupts him. “I’m with you. Do you have a horse for me?”

Around an hour later, the children arrive at the gates of Quintus Publius Victorinus’ enormous estate. The hillside above them is lined with terraces, extending up to the main house, an imposing building with a roofed portico between two towers.

“Vale, Annilio! Have fun in the garden,” says Marcus and starts up the stairs to the house.

Annilio investigates the first terrace. There are flowering apple trees and all sorts of herbs planted between them. Looking out from the high ground where the estate is built, she has a commanding view of the surroundings. There is a small lake enclosed in dense forests. In the background, the last patches of snow glint on the mountain slopes. On the second terrace, she finds rose bushes with full buds. “A pity they aren’t flowering yet,” Annilio thinks. On the third terrace she finds berry bushes, the first currants are turning red. She secretly picks some and pops them in her mouth, but quickly spits them out. “They’re not ripe yet!” Then Annilio lies down in the grass and watches the clouds. Bees are buzzing around her, swallows dart playfully through the air like arrows. The clouds form figures in the heavens above her. One of them seems to be a horse. Is it a flying cloud steed, or is it a real horse galloping through the sky?

„Anniliooo!“ Marcus comes running down the stairs, startling her from her daydreams. “Here I am!” she calls.

Annilio chews lazily on a straw. “It’s so lovely here. What’s the hurry? Just look at how the swallows are soaring.”

“I have something to show you,” whispers Marcus. “But not here.”

That gets Annilio’s attention. She loves secrets.

They run off until they’re far enough away that no-one can hear them. Then, Marcus turns his back to the house and pulls a papyrus scroll from his tunic. “Look! This is a letter from Rome. Rome – you know, the big city far away behind the mountains near the sea, the capital city of the Roman Empire where the emperors have their palaces. Our Latin teacher received this letter from his brother there.” 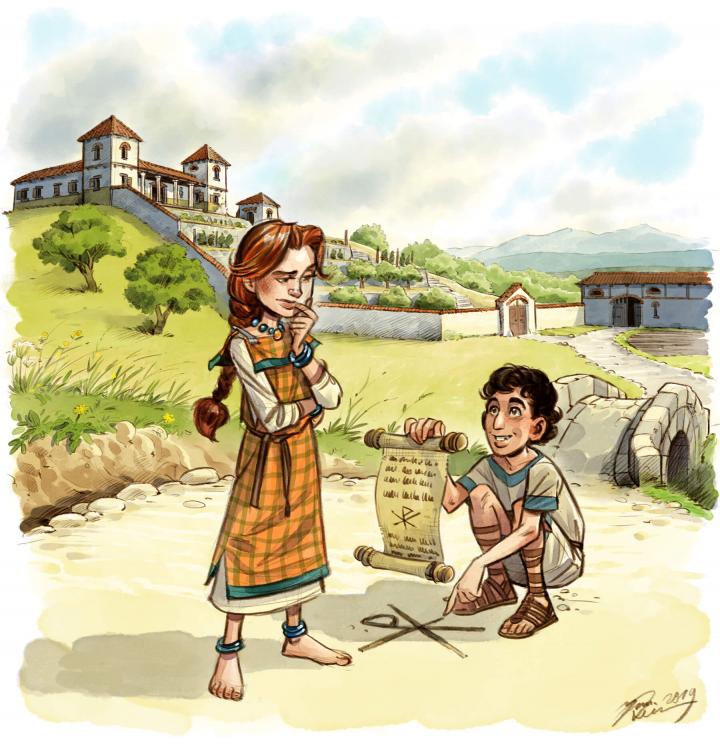 “That’s what I’m just about to tell you. My uncle gave me the letter to give to my father. He says that it’s such strange news that my father should read it himself. Listen up! He writes that there are strange people in Rome who believe that there is only one god. They call themselves Christians. And their numbers are rising. Apparently they even say that the Emperor is no god and, when they’re punished, they’d rather die than change their belief.” Marcus squats on the ground and rolls out the scroll. “Look here,” he says and draws a strange cross in the sandy earth. “That is the symbol for their god – or is it his son? I don’t quite understand that part of it.”

“Well, if their god has a son, then there must be at least two gods,” says Annilio sceptically. Does Marcus think that she’s going to fall for any old crazy story? “That symbol looks like two of your letters written together: I don’t see what’s so special about it. And how is their god supposed to be able to watch over everything at the same time?” She begins listing all the things she can think of. “The bees, the fruit, the water, the mountains, the sun, the moon, the harvest, the births …”

Marcus hurries to interrupt her. “No idea. Apparently they say that god’s son – that’s the one with this symbol – lived as a human. He’s supposed to have healed the sick and wakened the dead. And he taught that his father who lives in heaven loves mankind and that we should all love one another as we do ourselves. In the letter, my teacher’s brother writes that in Rome some of the believers in this god have started freeing their slaves, saying that all men should be equal and live with another in peace.”

“But we’re living here together in peace without all that,” says Annilio. She can’t understand why Marcus is so excited. “Come along, Marcus, forget that boring letter. Don’t you feel the wind coming up? And the swallows are flying low. I think it’s going to rain soon. Let’s find our horses and ride back home.”

“Yes, it looks like rain,” agrees Marcus pointing to a dark cloud above them. “Hopefully we’ll get back before it starts.”

As they ride home, the children are still busy thinking about the letter. Annilio wonders why those people in Rome don’t seem to know anything about the gods who live in the trees and in the rivers. And she asks herself: if this god in the heavens had a son, then who was his mother?

At the same time, Marcus is trying to imagine how it would be if no-one needed a sword anymore and there was no more fighting. But he can’t believe that everyone would really lay down their weapons. And then, it would be silly if they all had swords and he didn’t. Hmm. That raises all kinds of problems. Marcus is so lost in thought that he doesn’t even notice how far ahead Annilio is, until she calls him. “Gee up!” he urges his horse on and leans forward over its neck. They ride together the last miles home.

“You know what, Marcus,” says Annilio. “Maybe only grownups can understand that letter.”