back Marcus and Annilio - Chapter 3

It’s harvest time on the estate of Lucius Terentius Verus and everyone is busy from sunrise to sunset. Only Marcus didn’t go to work in the fields today, because he had lessons in grammar and maths at home. Now he’s so bored that he has dug out his old sling shot from the bottom of his toy chest and is practicing shooting pebbles at a beaten-up iron bucket. “Bang”, hit it! “Plop,” missed it. “Plop.” Drat it, missed again! “Bang.” “Bang.” How dull! This is a child’s game, the bucket is much too easy to hit. Marcus starts kicking a stone around the yard, wondering what to do next. Then he hears hooves. A messenger rides through the open gate into the courtyard.

“Salve,” the rider hails him and dismounts. “I have a message for Caius Terentius Praesentinus.” Marcus leads him into the house, where his father is busy writing calculations on a wax tablet. “Greetings, Caius, son of Lucius Terentius Verus. I have news for you,” says the messenger and produces a number of wax tablets and a papyrus roll from his bag.
Marcus’ father thanks him, lays the tablets and the roll on his desk, and takes a few coins out of the leather money bag hanging from his belt. The messenger counts the coins, smiles appreciatively and bows.

“May Bedaius favour you, worthy Caius Terentius Praesentinus,“ he says and departs. Marcus hears him calling his horse and shortly afterwards the sound of hooves clattering on cobblestones. The messenger is gone.

Marcus’ father points to the papyrus roll. “Look, Marcus: That is your uncle’s seal. What on earth can be so important that it was worth writing on papyrus? Let’s see!” Caius seizes the roll with its large red wax seal and breaks it open. He unrolls the stiff papyrus and gives it to Marcus to read. “Show me what you’ve learnt, son.”

“Well, what does Lucius need? Give it here!” says his father, impatiently taking the roll from his son. “Hmm, you’re right, that is quite difficult to read. My brother should really employ a better scribe. Let me read it through.” He studies the roll. “He writes: Dear brother, I need a special sword to give to our governor. I need his consent to expand my trading connections, and a nice sword made of that famous Noric iron of yours would be just the right gift to convince him. I’ve heard that there are ironsmiths in your villages who make such swords. Do you think you could arrange it? I’ll send you the money as soon as I hear from you.”

Marcus jumps for joy. Noric iron! They will have to go to Annilio’s village to find a Celtic smith who knows how to make it.

But next morning, as they arrive at the village, Annilio’s father Ateualus tells them that the village smith has broken his arm while attempting to constrain a raging bull. “He won’t be swinging a hammer for a while,” says Ateualus. “But I have an idea. There is a tribe living east of here at the foot of the mountains, and they’ve got an ironsmith who is famous for his skill. If I put in a good word for you, he will certainly do the job.” And so they set off together, Marcus and his father with Annilio and her father, riding eastward along the edge of the mountains. On their way, they have to cross the wild river Ache, fording the torrent at a shallow place. Marcus and Annilio exchange looks. She doesn’t seem to have any fear of the river. For his own part, Marcus is relieved to reach the other bank in one piece. Then, ascending a chain of hills, they see smoke rising before them.

“Fire! Quick, we have to help!” shouts Marcus, spurring his horse on.

But Annilio only laughs. “Take it easy! That’s just the smoke from the fires where the iron workers are melting the ore from the rock. In the mountains near the village they find these special rocks.”

Finally, they arrive at a Celtic village located by a river at the foot of a mountain slope. Pillars of smoke are rising from a number of mounds lying at the outskirts of the village. From afar, they can hear the rhythmic banging of a hammer on iron. “It sounds like Bellicius the ironsmith is there,” says Annilio’s father. “That’s good. Let’s see if he’s willing to sell you a sword.” They ride into the middle of the village where the sound of hammering is loudest. In the smoky glow of a fire they see a giant figure at work. The closer they come, the hotter it is.

“It’s a giant,” whispers Marcus to Annilio, but she just giggles again. Why do girls always have to giggle like that? Marcus has heard stories of the giants who live in the north, but up to now he has never really seen one. Bellicius, however, certainly seems to fit that description: he looks like a mountain of muscle. With one hand, he holds a glowing lump of iron in a pair of tongs, and with the other he wields a huge hammer to beat it into form. Every once in a while, he stops to dip the iron into cold water with a great hiss and clouds of steam, or to hold it in the glowing embers. Then he starts hammering again.

“He is one of the best swordsmiths in our land,” says Annilio’s father proudly. “And nobody knows how to forge iron better than our Noric smiths.”

Marcus has heard stories of indestructible swords made here, sharp enough to fell a tree with a single stroke and hard enough to hit stone and remain unbent.

As Annilio’s father begins speaking to him, the smith hangs his hammer in a holster on his belt and listens. The children anxiously watch their fathers negotiating with him. Suddenly the swordsmith hammers with his huge hand against a wooden beam and shouts something. He turns around and runs out of his hut in giant strides. Before Marcus and Annilio can ask what is happening, he returns with a shining silvery sword in his hands. He slashes the sword through the air with a whoosh and splits a thick wooden log with a single blow. Then he turns and strikes it hard against the stone fire pit. 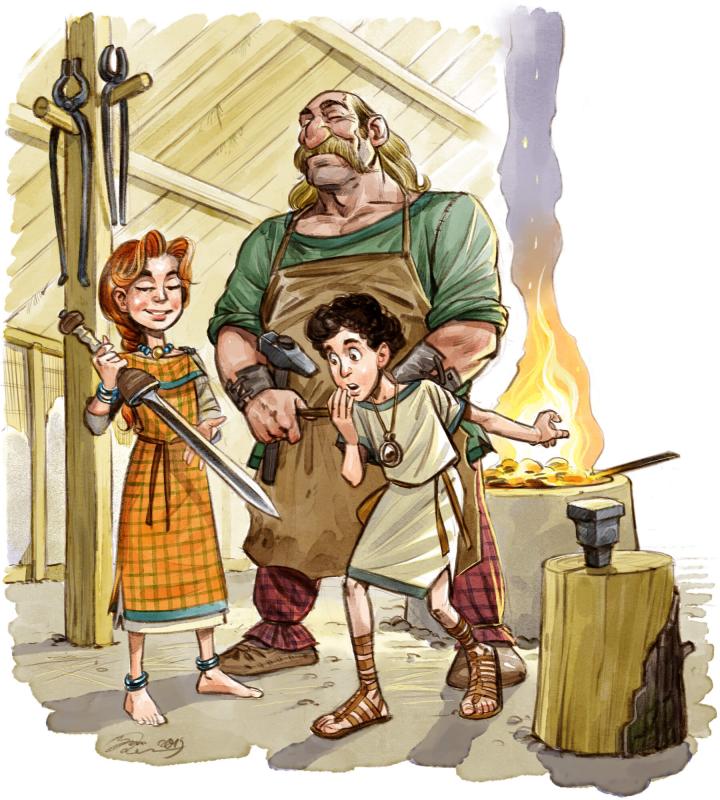 „Bravo!“ Annilio claps enthusiastically and stretches out her hands. “Please, Bellicius, let me hold it.” Bellicius the giant smiles gently and gives her the sword carefully. Annilio holds it so that Marcus can inspect the blade. “Now just see if you can find a dent.”

“Not a scratch. The blade is as smooth as polished silver!” Marcus is very impressed.

Marcus’ father is also happy with the deal. He takes a pile of silver coins from the money bag on his belt and counts them as he lays them one after the other into the smith’s hand, until the smith nods his head. To seal the buy, the swordsmith brings honey wine and three drinking horns from his hut.

As usual, the children find it boring when the adults sit down to drink. They decide to go to investigate the cause of all that smoke. At the edge of the village there are huge piles of red rock. “Those are the rocks that have iron in them. You can recognise them by their red colour,” explains Annilio. Near the river they see a number of smouldering mounds. Columns of smoke are rising from them and it smells like fire. “They’re burning wood to make coal,” says Annilio. “You need coal to melt the iron from the rocks.”

Marcus feels like he’s entered a strange new world. Everyone here seems to be in some way involved in making iron: Even the children are busy carrying stones – or are those coals? With all that smoke, he can’t really see clearly. But he’s impressed. “When I’m grown up, I’ll buy myself a sword here,” he decides. On the trip back home, Marcus is very silent. He’s picturing himself as an invincible centurion with a magic sword of Noric steel, fighting in distant lands at the head of his cohorts – and imagining how Annilio will admire him when he returns victorious.