back Marcus and Annilio - Chapter 1

A few weeks later, Marcus and Annilio meet again. Annilio’s father wants to visit his business partner, Caius Terentius Praesentinus, to buy mules for transporting his products that are soon to be harvested. Annilio pesters him until he allows her to come with him.

While their fathers are once again absorbed in never-ending negotiations, Marcus gives Annilio a tour of the family estate. Annilio can hardly believe how the Romans live. The estate at the foot of the Hitzelsberg has all kinds of buildings, some are even just for animals: those are the stables, where the cattle, mules, and two horses live. There is a house for Marcus’ family, and one for the supervisor and his family. There are also work sheds. And then, there is the bath house.

Annilio is particularly interested in the bath house; she can hardly believe that anyone needs a house specially for bathing. “In our village, we just bathe in the river,” she tells Marcus. “And then there’s the lake nearby. It’s great fun to swim in the lake. I’m allowed to go swimming there if my brother comes with me. That’s why my people like to live near a river or a lake. Then we always have water to go fishing or swimming and don’t have to build a house for all that.”

“Come,” says Marcus and leads her across the courtyard to the small bath house. “I’ve got a surprise for you. I asked my mother to warm the bath up for your visit. Look, there’s where the fire is.” He points to a small stair beside the bath house. “Underneath, there is a big oven where we burn a pile of hard wood. The heat rises up, warming the water and the rooms above. Just wait. You’ll see how warm it is in the bath. It’s nothing like your lake.”

He opens the door and a cloud of steam comes out. It smells like herbs. “Before we go in, we first have to wash our feet and change our clothes,” explains Marcus. “Here is the changing room – the apodyterium, as we call it.” In the changing room, a maid is waiting for the children with striped towels laid over her arm. She sends Marcus out and shows Annilio how to tie the first towel tightly around her body and elegantly wear the second one over it. Pleased with the result, she calls Marcus back. “Normally, men and women bathe separately in our baths,” whispers Marcus. “But since we are children, we may take a bath together. Besides, my mother said we could, because your father is the chieftain of your tribe, and because Tulia is here.” He opens a door and tells Annilio to follow him. Behind the door is a room with a small, flat pool.

Annilio carefully tests the water temperature with her toe. “Oh!” she cries out. “It’s cold!”

Marcus grins. “Yes, it’s the cold bath. That’s why we call it the frigidarium.” They descend a set of stairs into the water until it reaches their thighs. It’s prickling cold, but refreshing in the heat of the day. At the edge of the pool is a wooden ladle. Marcus explains that his father and grandfather use it to pour cold water over their heads, backs and chests. “It hardens you up,” he claims and pours himself a ladle full of watter over his head. Annilio is very impressed by his Roman courage, briefly forgetting that her father and brother Ario wash themselves in an icy stream even in the cold of winter.
“That’s enough now,” says Marcus, shivering with cold. “Let’s go to the next room. You won’t believe your eyes!” He opens a heavy wooden door. “Our caldarium,” he announces proudly. The children enter a room with coloured fishes painted on the walls. In the middle is a large rectangular pool with stairs descending into the water on all four sides. 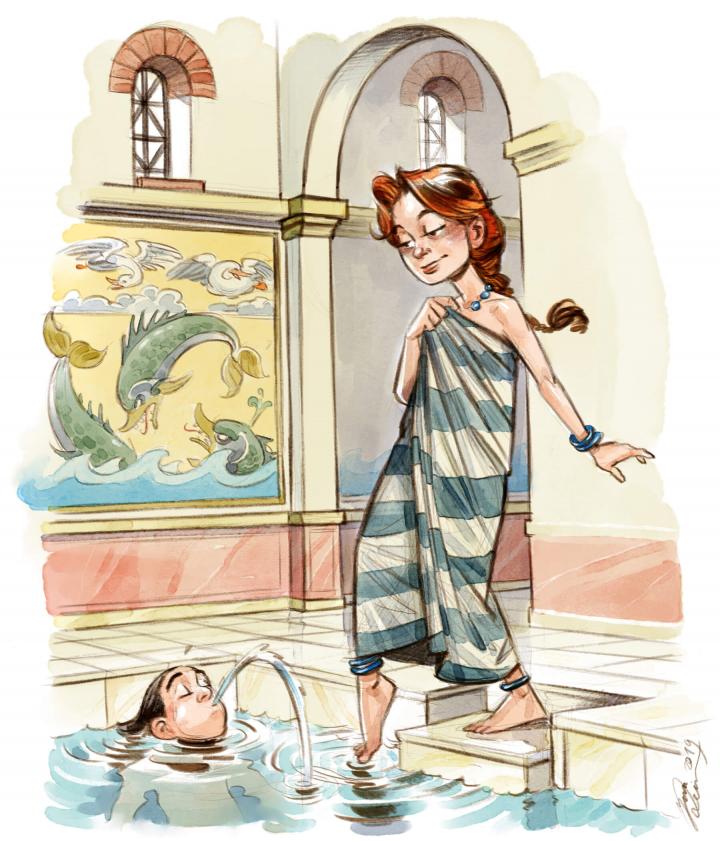 Again, Annilio carefully tests the water with her toe. “Oh,” she cries out, this time with delight. “It’s so warm!” She has never seen the like of it: a man-made pool with warm water!

The children play in the warm pool until they are tired; then they sit on the benches along the walls. The air is steamy and smells pleasantly like herbs, Annilio likes it. “The steam makes me sweat though,” she says.

“Sweating is part of bathing, it cleans,” explains her young Roman friend. “Adults also rub their skin with oil and scratch themselves clean with a spatula.” In the bath it is so warm and comfortable that Annilio is almost dizzy for delight, she doesn’t really want to follow Marcus as he gets up to go into the next room. “Come on,” says Marcus and opens the door. “It’s cooler here. We call this last room the tepidarium. It’s where we go to relax after the bath.”

“Mmm, it is comfortable here,” agrees Annilio. She sits down on one bench and Marcus on another. Annilio stretches out with relish. “I could stay here forever.” It smells wonderfully like lavender.

“Children, it’s enough now!” calls Tulia, the maid, after a while. The children wash their faces and arms in the basin standing on a pedestal in the middle of the room. Marcus runs off and the maidservant helps Annilio out of her bath towels. Annilio slips back into her own clothes; they feel a little rough and scratchy after the fine soft towels. She is reluctant to leave the marvellous bath house.

“Let’s see if our fathers are finally finished talking business,” says Marcus to Annilio as they step out of the bath house, beckoning her to follow.
Next chapter