back Marcus and Annilio - chapter 9

After so many weeks of rain, everyone is relieved by the marvellous spell of warm, late summer weather that follows. Marcus’ father can bring in a good harvest after all, and also the Bear Clan fills its hay sheds and storage rooms. There’s lots to do and even the children have to work from early till late in the fields and in the kitchen. Marcus helps out with the slaughtering and making sausages. Annilio tresses innumerable onions into long braids which she hangs out to dry. Finally, the work is done and everything is ready for the winter. The family fathers have delivered their products for sale and have fetched a good price.

One morning, Marcus’ father says to his son: “Marcus, it’s time for the autumn market in BEDAIUM. You always wanted to go there, didn’t you?”

Marcus stares with surprise. Would he ever like to ride to the market in BEDAIUM! But every time he’s spoken of it in the last years, his parents have always said that he’s too young, that the market is no place for children, and that he’d only get lost there.

This time, however, his father pulls out the money bag that hangs on his belt and says: “This year you’ve worked almost as hard as a grown man, Marcus, and you should get properly paid for your work. I’ll give you one denarius and eight asses; that’s a lot of money. Go to the market and learn how to bargain. And take Annilio with you. I’ll give you a denarius for her too: she should by herself something nice. Thanks to her father’s connections, my business went well this year. Get yourself ready. I’ve already arranged everything with Ateualus. Annilio should be here any minute.”

Marcus can hardly believe his ears. He’s to ride to the autumn market with Annilio? Is he dreaming?

“Salve, Marcus!” Annilio greets him, beaming with joy as she rides through the gate. “That’s a fine surprise that our fathers have planned, don’t you think?”

A servant comes from the stables bringing two horses, one for Marcus and one for himself. Marcus is surprised to see that he’s armed with a sword.

“Acutus will look after you,” says Marcus’ father turning to the children with a serious face. “You two stay together! Understood? And see that you always stay near Acutus!” Then he addresses the servant: “And you, Acutus, bring Marcus and Annilio back safely, if you value your life!”

Marcus is astonished at his seriousness. He’s probably just worrying about nothing, he thinks. Marcus mounts his horse and they ride off. The sky is blue, the sun shines and a slight, warm breeze blows in their hair. Annilio can’t suppress a shout of joy. A day off work, together with Marcus, and the autumn market in BEDAIUM: It simply couldn’t be better!

“We’ll soon be riding past the estate of Publius Seppius Severus. Do you remember him?” asks Marcus Annilio. “We visited him and his wife on the building site in February and now they’re both dead. They died of pneumonia in August, it seems. That’s just when my family was also so sick. You and your mother helped us.”

“Oh, I’m sorry to hear that,” says Annilio pensively. But she soon starts to giggle again.

“And do you remember how the grumpy overseer wanted us to leave?” On such a lovely day, it’s impossible to stay sad for long.

“But then he brought you a stool so that you could admire his mosaic floor,” adds Marcus.

“Up there on the hillside is his estate,” says Marcus shortly thereafter. “Soon we’ll be coming to the big road leading from IUVAVUM to AELIA AUGUSTA.” The children are now no longer the only travellers on the road. From everywhere in the region, there’s a constant stream of traffic on the way to the market in BEDAIUM. They see ox-carts with bulky loads, large earthenware pots or bundles of reeds. Herds of cattle and goats are being driven along the side of the road. From a wagon loaded with cages they hear a loud quacking.

Suddenly Marcus cries: “Stop!” and springs from his horse.

“What’s up?” asks Annilio impatiently. She can’t wait to get to the market.

“But why is the stone here at the side of the road?” asks Annilio, who sometimes still doesn’t understand Roman ways.

“We Romans always erect our gravestones near large roads. That’s where everyone can see them. I tell you what: I’ll read you what’s written on the gravestone and then we’ll pray together for the dead. How about that?”

Annilio has to agree, but secretly she’d rather be on the way to market. Besides, she can’t understand why the Romans have to write things on gravestones. Her people use writing for practical things like administration, but not to remember the dead. And what a load of work to inscribe letter for letter into stone!

“Annilio, did you hear what I said?” asks Marcus, who’s just finished reading.

“Sorry Marcus,” Annilio shakes her head. “But now I’m listening, I promise.” She sits down at the side of the road. 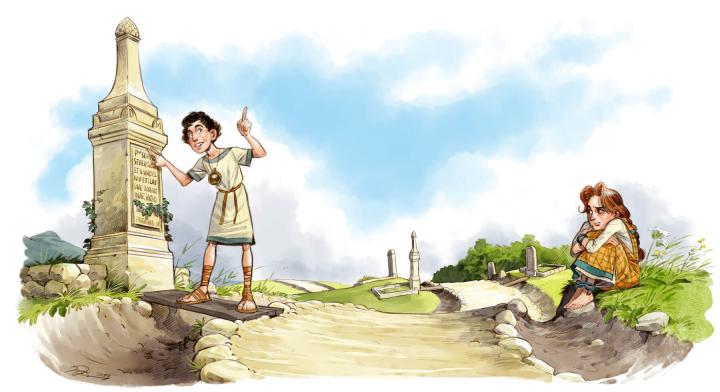 “All right then, let’s start again. We begin with the first two letters at the top: D and M. That means: ‚to the gods of the dead‘. Then come the names of the deceased: “For Publius Seppius Severus, council member and mayor of Claudium Iuvavum, and for Claudia Florentina, his wife …”

“Wow! He was the mayor of IUVAVUM?” Annilio is very impressed. “No wonder that his gravestone is so large. But what’s that at the top of the stone?”

“That’s a pine cone. Pines grow in the south where our ancestors come from. The cone is a symbol that life goes on after death,” explains Marcus.

“Now that’s something that I can understand,” says Annilio. “The cone has seeds in it and from the seeds new trees can grow.” She’s relieved that there are not just inscriptions but also symbols on the gravestone. Also in her clan, they carve symbols onto objects. “But that’s enough of these inscriptions now. Let’s pray for the dead and then continue on our way to the market.”

The children stand piously before the gravestone and offer prayers for the dead, each in his and her own way.