back Marcus and Annilio - chapter 8

It has rained for weeks. The paths are full of mud and almost usable. The sun’s rays hardly pierce the heavy clouds, and when they do, it soon begins to rain again. What a summer! Swimming in the lake is no fun, for the water is much too cold. People are starting to worry about the harvest this year. “We need sun to harvest our crops,” says Annilio’s father every day as he looks out into the rainy grey skies. The only ones enjoying this weather are the ducks and geese quacking and splashing about merrily in the puddles between the huts.

But one morgen Annilio wakes up and notices that something has changed. The constant patter of falling rain is gone: It has stopped raining. About time, she thinks, jumping up from her bed. Outside, mist is rising from the damp earth in the sun’s warm rays.

Somebody knocks on the door of the hut. It’s Marcus; he’s looking a bit timid. This is the first time that he’s visited the village of the Bear Clan without his father.

“Why, it’s Marcus, the son of my dear friend Caius Terentius Prasentinus!” says Annilio’s father joyfully and bids him enter, patting him friendly on the back. “How can we help you? And how is your family?”

Marcus looks around uncertainly. After overseeing her at first, he’s relieved to see Annilio there sitting on the floor near the fireplace and combing burrs from the fur of a large wolf-like dog. “I …, I mean: we …,“ he stammers, blushing furiously. “They’re all sick at home,” he manages to blurt out finally. “Mother and Claudia are constantly freezing or sweating, they’re very weak. My father is coughing so much that he can hardly speak. Even our maid Tulia and the cook are sick in bed. I’m the only one who hasn’t caught it. I have been making infusions for everyone for weeks, but now our supply of herbal teas is used up. In the servants’ quarters they’re all sick too; they can barely manage to feed the animals.”

“Why didn’t you come to us earlier, Marcus?” Annilio’s mother is very concerned. “How long have your sister and mother had fever already?”

“I’m not sure, maybe eight days. With their sore throats they hardly want to eat anything either,” answers Marcus dejectedly.

“That doesn’t sound good at all. They must be completely exhausted. We’ll have to do something immediately.” Annilio’s mother slips into her clogs. “Luckily, there are healing plants that can help your family. Annilio, you know where they are. You two go gather the plants and I’ll run up to your family’s estate. Bring me back willow bark, some bark and leaves of the alder tree, bridewort, buckhorn … and some betonica – you know: woundwort – to give them back their strength. Hopefully you can find some.”

“Yes, mother,” says Annilio looking out of the small window. “We’re on the way. The mist is just lifting.” She takes a basket with shoulder straps from the wall and stretches up on the tips of her toes to reach the sickle hanging on a hook up high.

“Wait! I can reach it for you,” says Marcus. He’s relieved that they’re going to help his family. Annilio has often told him that her mother Ategenta makes medicine for the village people and is always being called to help out with childbirth, tending wounds and healing sicknesses. He doesn’t know why he didn’t think earlier to ask Annilio’s family for help.

Annilio leads the way. “Come along, it’s not far now. Over there beside the stream there’s bridewort: It’s the plant with the fine white flowers.” The earth is soaked with water from the long rainfall and squelches under their feet.
Marcus struggles to follow in Annilio’s footsteps. They’re walking around the edge of a large bog stretching over the flatlands from the lake.

“Be careful of the snakes,” warns Annilio over her shoulder.

Snakes! Marcus shudders anxiously. He doesn’t like snakes in the slightest. He’s also a bit scared of the bog, because he has heard all kinds of stories about people being led astray in it by wandering lights and disappearing forever. In the middle of the bog there’s said to be a lake which is a holy place for hoary deities of bygone ages. But Annilio doesn’t seem to be afraid in the least. Marcus hurries to catch up with her.

“Here!” Annilio, who is already kneeling on the ground, gives him the basket. With her sickle, she cuts off some of the long-stemmed plants with dark leaves. Some of them have a crown of small, lucidly white flowers. “They’re already withering. But smell them, they smell marvellous.” Annilio holds the flowers under Marcus’ nose. She’s right: they smell sweet like honey. A few small trees are standing on the riverbank. “What luck!” says Annilio, pointing. “Those are alder trees. You can recognise them by their catkins and tiny cones. Our men make shields with their wood. But now we just need their leaves and bark.” While Marcus is busy picking leaves from the branches, Annilio cuts some bark from the trunk. Beside the alders, there is a tree with hanging branches and thin, silvery leaves: a willow. Annilio snips off a few twigs. “Good. Now let’s go over there,” she says pointing uphill. The children follow a narrow path up the hillside. “Here’s the buckhorn,” says Annilio, bending over to pluck a few long thin leaves from the ground. “Oh, and look over there!” She points to a small tree with bunches of shining red berries. “That’s a rowan. The berries are good for recovering your health.” The children pick a few bunches of the berries into their basket.

Marcus is just about to stick some of the tasty looking berries into his mouth.

“Better not,” advises Annilio. “They’ll give you stomach pains when raw. We cook them with honey, that’s much better. Now, all we need is the woundwort. Come on, we need to go a little higher: that’s where it grows.”

“Mmm, mushrooms. Can you eat them?” says Marcus pointing to a cluster of mushrooms with velvety brown caps along the path.

“Yes, those are boletus or penny buns, they’re really tasty,” says Annilio with delight. The children pick them and put them into their basket along with the berries, leaves and bark.

“Just as I thought: there’s the woundwort,” says Annilio pointing to a large cluster of plants with round leaves and violet flowers. She puts down the basket, kneels down and cuts a bundle of woundwort. 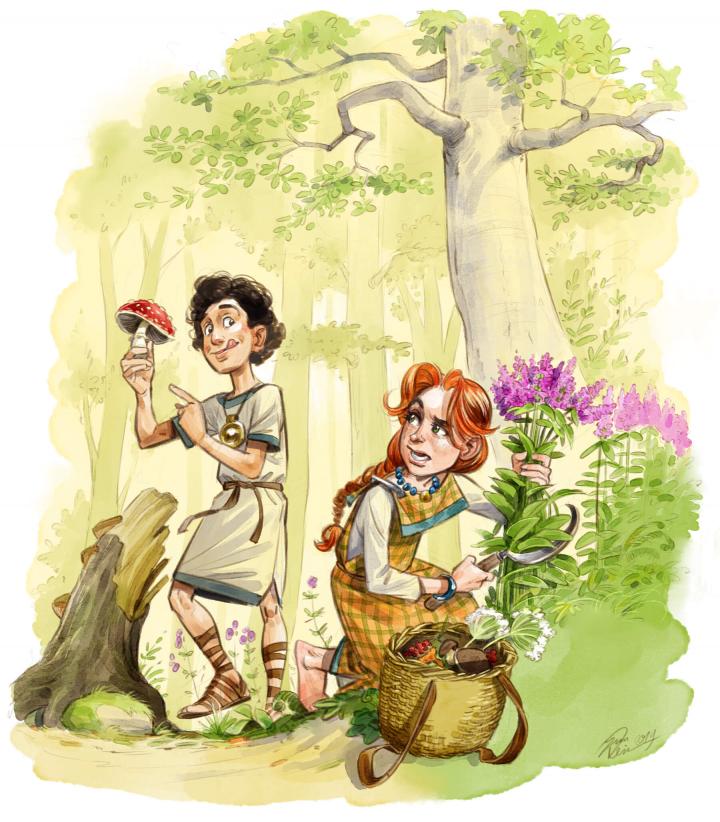 “Wow, this one looks tasty.” Marcus is holding a large mushroom with a red cap with white spots in his hand. Annilio shakes her head. “No, that’s poisonous. Don’t you know that?” Marcus is disappointed.

They return to Marcus’ family estate with a full basket. In the meanwhile, the sun has burnt off the mist and shines warmly on their faces.

In the kitchen, Annilio’s mother immediately uses the plants they’ve brought to make tees and mashes some of them to make a paste. She gives Marcus’ father a chest compress with the paste and a tee of buckhorn and alder leaves. Marcus’ mother and sister have to drink a bitter drink made of alder bark. “That will help lower your fever,” says Annilio’s mother. Then she gives them all a big cup of woundwort tea with the words: “That’ll give you back your strength.” She promises to come around again tomorrow.

Today, Marcus is particularly glad that Annilio is his friend.
next chapter