back Marcus and Annilio - chapter 4

The harvest is over now and the fields are bare. The shelves in Lucius Terentius Verus’ pantry are full with apples and nuts. The floor is stacked with wooden barrels full of chopped white cabbage pickled in a salty brine – that’s called sauerkraut. Yuck! Marcus finds the smell of the fermenting sauerkraut disgusting. Beside the barrels, there are chains of pork sausages hanging from the ceiling and the last grapes of the season are spread out to dry.

On a cloudy day in October, Annilio comes with her two brothers, Matulus and Ario, and her parents to visit Marcus’ family on their estate. The two fathers, Caius Terentius and Ateualus want to celebrate their successful business venture with a feast. Annilio’s father brings precious gifts for Marcus’ mother: a large fibula and two arm-rings of glass, one yellow and one blue. As his contribution to the meal, he also brings a freshly killed deer and a pike. For his part, Marcus’ father has brought a roll of woven cloth and a ceramic bowl with hunting motifs from IUVAVUM to give to Annilio’s mother Ategenta. In the dining room, the table is already set. But the visitors are surprised to see that there are no chairs, but rather couches around the table. Marcus’ family explain that these are called “clinae” and that it is the Roman custom to dine lying down on them. The housemaids bring the food out; one course follows the other. There’s so much to eat that Annilio is afraid she will burst.

After the feast, the parents talk about how they should thank the gods for the good weather and the plentiful harvest they’ve had. They agree that this year the spring and summer were particularly warm and the crops bounteous.

Marcus’ mother has an idea. “For all this, we should thank Mother Earth and all the mother goddesses,” she says and turns to Annilio’s mother. “Ategena, isn’t there a holy place on the other side of the big lake where both Romans and Celts go to worship the Great Mothers?”

“You mean the sacred hill of the Alounae, our holy tribal mothers,” says Annilio’s mother well pleased. “What a wonderful idea. We should bring them our offerings!” Their husbands nod in agreement. It’s decided and the families start planning their trip.

Early next morning they start off. Since their route makes a long detour around the bogland surrounding the lake, Annilio and Marcus have to get up at the break of dawn. They travel in a wagon pulled by two strong horses. A thick mist lies over the lake and in the fields, making the path hard to find. Even at midday, the sun hardly shows its face and it remains cold and clammy. The children wrap themselves in warm furs, but they’re freezing nonetheless.

“Do you know where we’re going?” asks Marcus Annilio.

She shakes her head. “I’ve never heard of it. Mother has never told me about this holy site. What are you bringing the Alounae as offerings?” she asks curiously, pointing at the full pouch that Marcus is holding on his lap.

“I took some apples, nuts and raisins from the pantry. Our cook also gave me five small spelt cakes,” answers Marcus. “And what about you?”

Annilio pulls a small cloth bag from inside her tunic. “I made a necklace for the Alounae,” she says, proudly showing Marcus a long necklace of threaded rowan berries and glass pearls.

The journey seems never-ending, but at long last Annilio’s father announces their arrival: “We’re there.” They all climb out of the wagon, stiff from long sitting. Above them rises a wooded hill.

“It’s up on top,” says Annilio’s mother, pointing to the summit. She and Marcus’ mother tie scarves on to cover their hair and lead the way, followed by their children. The men bring up the rear. A small path leads up the slope. In the thick mist, it is difficult to find the way. On both sides of the track, the trees and bushes seem eerily alive, stretching out their branches as if to catch the visitors as they pass.

Marcus gets goose bumps from the place. It’s creepy here. He’s heard lots of stories about the spirits of the dead dwelling in places like this, or of gods appearing to take their offerings. On the top of the hill, the path leads to a small clearing in the trees. Marcus sees wooden planks standing in the ground with something hanging from them. Whatever it is, it looks to be moving. “Are those humans hanging there? Or ghosts?” he asks himself fearfully. But Annilio beside him doesn’t seem afraid in the least. Also the grownups don’t appear to be disturbed. It’s probably nothing dangerous, he tells himself, but just to be sure, with his free hand he tightly clutches the bulla hanging on a thick leather strap around his neck. It is a talisman which he was given at his birth to protect him. Standing directly before the planks, he can see that the moving things are just pieces of material fluttering in the wind.

Annilio approaches them fearlessly and inspects the material. “They’re pieces of clothing,” she says, pointing with her finger. “And look, there are even a few pretty fibulae on them.”

“Don’t you dare touch them!” her mother warns her. “Everything here has been consecrated to the Great Mothers.” Annilio draws back her finger with a start.

Now Marcus also comes nearer to view the fluttering pieces of cloth. They are fixed to the planks with large iron nails. Some of the pieces of clothing are woven with bold colours in the traditional chequered patterns of the region; one is deep red and blazes brightly despite the dull weather. Scattered everywhere on the ground are small bowls with gifts to the gods.

In the meantime, Annilio’s and Marcus’ mothers have packed out their offerings and spread them out on the earth beside a large stone. They light a small fire and burn some resin while softly incanting prayers.

Annilio places her self-made necklace on the stone and prays aloud: “Dear Alounae, please protect our families and let nothing bad harm us.”

Marcus is still a little wary, but he plucks up courage and lays his offerings of apples, nut, raisins and the five little cakes next to her necklace.

Also the fathers thank the Alounae for their rich harvest and successful business this year and pray that the coming year may also be as good.

“May the gods bless our families,” intone Annilio’s and Marcus’ mothers together. The resin in the fire smoulders peacefully spreading its wonderful scent in the air. 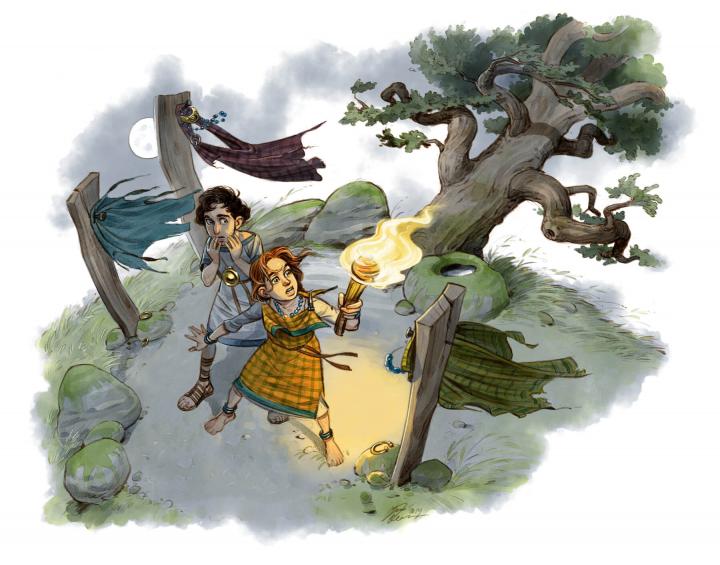 The families arrive home in BERUNUM in the middle of the night. Both Marcus and Annilio are relieved to crawl into their own beds, he in his house on the Roman estate and she in her hut in the Celtic village. How surprised they would be to know that they both dreamt the same dream that night: They see themselves standing together without their parents on the hill in the pale moon light before the holy site of the Alounae. How eerie!