back Marcus and Annilio - chapter 10

A fine day at the market

The journey from BERUNUM to BEDAIUM is long. It’s already almost midday as Marcus and Annilio reach the bridge over the river Alz. There’s a long line up of carts on the road, because a roman toll keeper is controlling the goods and collecting the bridge toll before letting the wagons across the bridge to market. Fortunately, Annilio, Marcus, and their servant Acutus, who’s been entrusted with looking after them, may cross without paying the toll. The bridge keepers usually let visitors to the market pass free of charge. On the other side of the river, it’s close and crowded. There’s so much to see that the children don’t know where to look first. Finally, Acutus ties up their horses at an inn. On the left, they see a temple rising above the waters of the lake, gilded by the warm autumn sun.

Annilio tugs at Marcus’ sleeve to get his attention. “Look Marcus! The Bedaius temple is made of the same white stone as that gravestone we saw on the way here. And over there, a real bear!” A man is leading a huge bear with a muzzle on a chain through the crowd. “But where is the market?” Excited, she grabs hold of Marcus’ hand. “We have to stay together.”

Marcus feels a bit embarrassed holding her hand, but tries not to show it. “Over there, that’s where we have to go,” he says pointing. “The artisans have their stores along that street and the merchants who come to town for the market set up their stands between them.”

The children let themselves drift in the stream of visitors. There’s so much to see: staples of uncoloured linen and dyed, woven wool cloth; piles of amphorae full of oil or wine; sheep skins; shiny furs; earthenware oil lamps, and much more. One stand has Celtic armbands made of glass for sale, another has leather belts with iron buckles. All around, the merchants prize their wares at the top of their lungs. An artisan is busy showing his assortment of fibulae to a group of ladies. Over here someone’s grilling fish; over there there’s a fat lady stirring the contents of a huge cauldron hanging over a fire; and in the middle of the crowd a man is walking around selling fatty doughnuts from a board. There are tiny earthenware statuettes of gods for sale, tools made of iron, boxes made of carved bone, polished metal mirrors. Annilio and Marcus see something new wherever they look.

Suddenly Marcus remembers the money that he’s carrying hidden safely in a leather moneybag inside his tunica. His father had told him to buy something nice for Annilio. He squeezes her hand: “You can choose what you’d like,” he tells her. “My father gave me money for you.”

That makes it even more exciting for Annilio: Whatever she’d like! But what? It shouldn’t be too expensive: that would be impolite. Maybe a fibula? But she has more than enough fibulae. Or some cloth? But her mother weaves the finest cloth around. Then she sees a stand with pottery for sale. There are bowls small and large, decorated or plain, and flasks with cork stoppers. That’s just the thing! She’ll choose some of those for her mother and herself.

“Salve, you two!” the lady at the stand greets them. “You’re looking at choice pottery from PONS AENI. Are you after something particular? We’ve got ware in all qualities from six different potteries. There’s something for everyone.”

“O, look! The small bowl there is nice. And the jug over there. Or the bigger bowl with a pattern. But a small flask would also be useful. Or … “ Annilio just can’t decide what she wants.

“Go on, choose the best ones,” encourages Marcus. “You won’t have another chance to buy pottery from PONS AENI for a while.” He pulls out his money bag and gives it to her. “Here, pay for it yourself.” 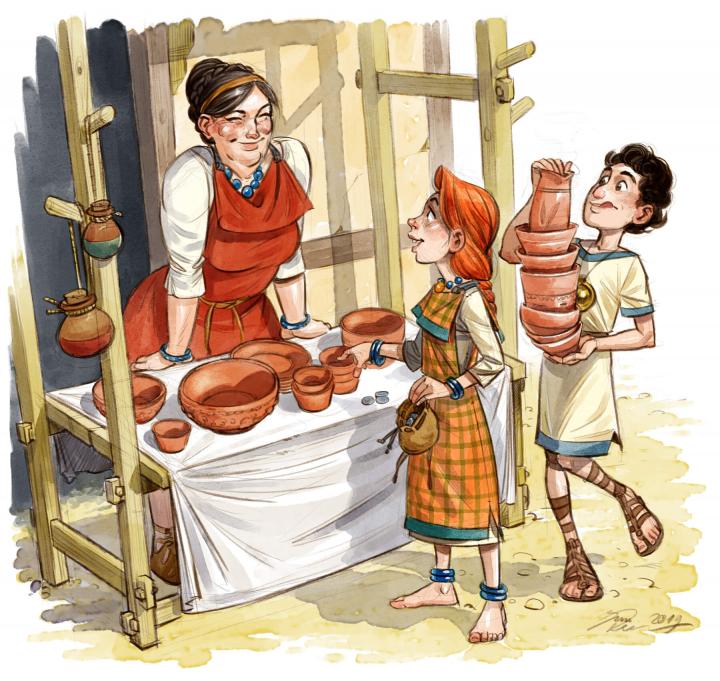 “Fine, then I’ll have this small bowl and … O yes! the one with the wide rim … “ Annilio passes Marcus the bowls one after the other to hold. “That cup has a nice decoration – and … How many bowls do I have now? Three? Good, then I’ll take those two as well and … a pitcher for tea. That will have to do.”

Marcus leans over to Annilio and whispers into her ear: “You can spend a whole denarius, you know.”

“How much for these seven pieces?” Annilio asks the saleslady.

“The bowls cost one as a piece, the cup and the pitcher two asses each. All together that makes nine asses,” says the saleslady.

“Hmm.” Annilio considers the deal. She’s certain that the saleslady is charging too much. “I’ll give you seven asses, if you throw in two of those small spice bowls,” she bargains.

“Done!” says the saleslady who likes her cheek. “Young man, do you need something to carry all that?” She gives him a wooden box from under her stand.

Marcus, who is struggling to balance the pile of pottery in his arms, nods thankfully. Carefully they pack Annilio’s buys into the box with layers of reeds between them.

As they reach their horses, their servant Acutus takes the box and ties it in front of his saddle for safekeeping. Then they ride home.

Marcus is proud of the belt that he bought. He’d bargained just like Annilio, offering the merchant only one denarius, although the man had wanted one and a half. In the end, he’d bought the fine belt with bronze studs for one denarius.
Both children come back home tired and content. What a fine day at the market!