back Marcus and Annilio - chapter 5

Many long weeks go by before Marcus and Annilio meet again. Winter covers the land with ice and snow. It’s cold and the children only leave the warm hearth when they really must. Annilio occupies herself by helping her mother at home. “If I have to sit around, I might as well spin some wool,” she decides. “But when the snow melts, I’ll go straight over to the Romans. It’s so boring here in the village.” The days go by. Finally, the sun’s rays become stronger, melting the snow from the ground. One sunny spring morning, Annilio can’t wait any longer. She asks her mother for permission and runs off to visit Marcus on the estate.

She arrives just in time to catch Marcus and his father standing in the courtyard with a packed wagon. A horse is being harnessed, they’re just about to leave.

„Annilio!“ Marcus beams for joy as he sees her coming through the gate. “Father and I are heading off. Come with us!”

Annilio pretends that she just happened to be passing by, so that Marcus won’t see how happy she is to see him. “Where are you going?” she asks casually.

“On the old road from IUVAVUM to AELIA AUGUSTA there’s a site where a rich councilman is building a new estate. He has brought skilled workers from IUVAVUM. My father wants to see if he can hire some of them for us, because my mother would like more bright colours in our house.”

That sounds like fun! Caius Terentius, Marcus’ father, sends a servant to the Celtic village to inform Annilio’s mother. And off they go! Wherever the road comes too near to the foot of the mountains, the carthorse has to pull them through old snow. The sun is still low and the snow lies longer in the shadows of the mountains.

The building site on the top of a hill is visible from afar. Large wooden cranes loom over it, raising and lowering their head like hens picking grains. As they come nearer, the children see that the cranes are really lifting heavy stones around. The house seems to be almost finished. At the entrance, a man is standing, waving to them. “Salve,” he calls, laughing. “Caius Terentius Praesentinus, have you brought your advisors with you?”

“Salve, Publius Seppius Severus,” answers Marcus’ father. “This is my son Marcus,” he says proudly. “And this here is Annilio, Marcus’ friend from the Bear Clan; she’s the chieftain’s daughter. They were bored at home and needed to get out after so many weeks indoors. Who doesn’t? So I brought them with me.”

The children politely greet the wealthy councilman, and he takes them all on a tour of the building site. Marcus and Annilio look around with wide eyes. On the horizon, the distant snow-covered mountains glitter in the cold, clear air like gems. In the other direction, the old trade road winds its way over the foothills like a grey ribbon through the countryside. Terraced vineyards line the hillside before them and lower down more buildings are being built.

Annilio drags Marcus to the building site. “Come with me. I want to see how the big house looks inside,” she says. The door is so heavy that the children have to push together to open it. Men are working in the entrance hall.

“Stop! What do you think you’re doing?” bellows a grey-haired man with a papyrus scroll in his hand. He’s standing on a pedestal and supervising two men kneeling at work on a mosaic floor. He steps down from his pedestal and approaches the children. “You’re not allowed to be here,” he says gruffly.

As Marcus tells him who his father is and that they are visitors, the man becomes more friendly and he greets them with a handshake.

“My name is Cupitus, I’m the mosaic master from IUVAVUM. Maybe you’ve heard of me – my mosaics are famous in the whole province of NORICUM.” Cupitus invites the children to admire his work, but sternly warns them to take care. They’re not to disturb the mosaic stones, not to stumble over the strings stretched across the room as guidelines for the symmetrical patterns, and not to touch the freshly painted walls.

The children dutifully promise him that they’ll be careful: No, they won’t touch anything; yes, they’ll pay attention to the strings; no, they won’t get in the way. Obediently they stand at the edge of the room and admire the work. It is so colourful! They watch the workers patiently placing the tiny stones, one after the other, sighting along the strings and reaching for the next stone. Now and then, Cupitus gives them orders from his vantage point on the pedestal: “Closer together!” “The centre of the circle is more to the left!” “Use red stones!” And so on.

It’s so interesting that Annilio doesn’t know where to look first. “Look Marcus, that man there is painting garlands. And see here, these stones have four different colours. I’ve never seen such a pattern in my life.” She kneels down to inspect the mosaic more closely.

Cupitus is pleased with her enthusiasm. He brings her a stool. “This part of the mosaic is finished,” he says. “We can walk on it. Here girl, stand on the stool so that you can see it from above. You’ll be amazed. And stand by her side, boy, so that she doesn’t fall down.” 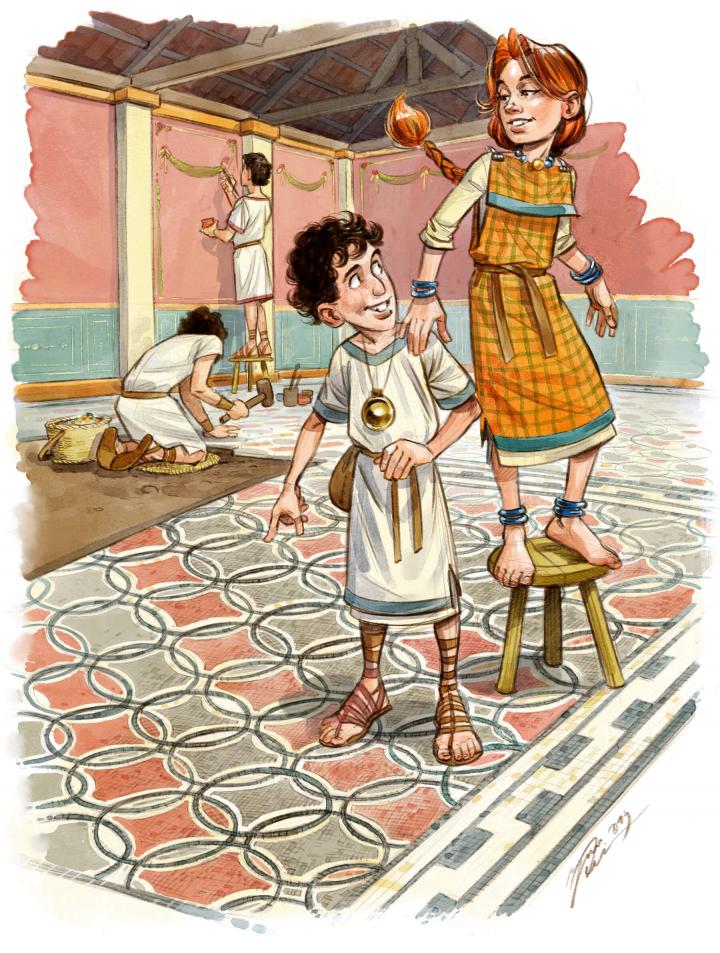 In the wink of an eye, Annilio is up on the stool. She stares at the floor with astonishment. “That’s fantastic. It’s like a net of chains all laid down on the floor, and so uniform! Marcus, how on earth do they do that?”

Marcus has seen mosaic floors often before, but he enjoys Annilio’s admiration. Finally, she has to concede that Roman handwork can also do wonders. “It’s geometry,” he says knowingly. “You have to calculate where the circles cross should intersect. Then you tie strings at the right distance to make a uniform pattern. But come on down now! There’s a mosaic with birds over there that I’d also like to see.”

Marcus is surprised that Annilio follows him without a word of contradiction. Her thoughts are miles away. She’s thinking of how beautiful the mosaics are. She could endlessly follow their lines with her eyes, from circle to circle. And how well the colours fit together! Someday, when she has her own house, she’d also like to have a mosaic floor.